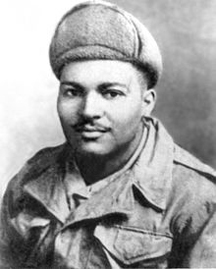 No African Americans originally received a Medal of Honor during World War II, although more than 400 were awarded to non-Blacks. The traditional reasons given for this exclusion were limited Black combat experience and White perceptions of Black ineptitude and cowardice. Half a century would pass before the omission was corrected.

This set in motion a series of actions that resulted in the Army commissioning a study by Shaw University "to determine if there was a racial disparity in the way Medal of Honor recipients were selected" during the Second World War.

Many African Americans, however, did earn Distinguished Service Crosses, Silver Stars, and Bronze Stars, lesser commendations for courage during World War II. The university's research uncovered 10 cases where Black American soldiers received a Distinguished Service Cross instead of the Medal of Honor. The Army decided that seven of the cases should be upgraded. Congress then passed legislation authorizing and implementing the awarding of the medals. In January, 1997, more than 50 years after the end of the war, President Clinton presented the medals. Only one of the seven, Vernon J. Baker, was still alive. He died in 2010. The seven men were: Vernon J. Baker - a First Lieutenant in the all-Black 92nd "Buffalo" Division, while fighting in Italy, he showed "extraordinary heroism" by destroying German equipment and installations, killing or wounding several German soldiers, silencing several enemy machine gun posts, covering the evacuation of his wounded men under fire, and leading his battalion through enemy minefields and heavy German fire toward his unit's objective. John R. Fox -  a First Lieutenant in the 92nd "Buffalo" Division, also fighting in Italy. Fox "Voluntarily remained on the second floor of a house to direct defensive artillery fire" to allow his unit to safely leave the area. When Americans retook the area they found his body among those of about 100 German soldiers.

Willy F. James, Jr., - A Private First Class, fighting in Germany, in the 104th Infantry Division, he led "a squad in the assault, accurately designating targets as he advanced until he was killed by enemy machine gun fire while going to the aid of his fatally wounded platoon leader."
The university's research uncovered 10 cases where Black American soldiers received a Distinguished Service Cross instead of the Medal of Honor. Ruben Rivers - A Staff Sergeant in the legendary 761st Tank Battalion. While fighting in France, with "extraordinary heroism" Rivers was wounded and repeatedly led his unit's tanks in assaults on German positions until he was killed covering his unit's tanks as they withdrew.   Charles L. Thomas -  A First Lieutenant in the 614th Tank Destroyer Battalion, fighting in France.  Although suffering from multiple severe wounds, he led a tank column through heavy German fire while also directing the emplacement of antitank guns. He relinquished command only after he was certain his subordinate was in full command. George Watson - A Private in the 2nd Battalion, 29th Quartermaster Regiment, fighting in New Guinea. He sacrificed himself to save his comrades, when enemy bombers hit his ship and he drowned when the suction of the ship sinking pulled him under.

Cornelius H. Charlton (pictured) - A Sergeant in the 24th Infantry Regiment, one of the last of the all-Black units, near Chipo-ri,Korea. He used grenades and machine gun fire to lead his men to repel a group of attacking enemy soldiers until he was killed. William H. Thompson - A Private First Class, also in the 24th Infantry Regiment, near Haman, Korea. He gave up his life to allow the rest of his unit to escape a group of enemy soldiers.

Publisher’s Note:  Part 5 of this 5 part series will appear in an upcoming issue of Port Of Harlem.

Gibbs in Person:  See and hear Gibbs at A Port Of Harlem Summer at the Alexandria Black History Museum, Saturday, June 18, 11:00 a.m.

A Port Of Harlem Summer at the Alexandria Black History Museum

The Alexandria Black History Museum hosts a series of programs from the pages of Port Of Harlem Magazine. All programs open with a 20-minute reception with light refreshments.

Reservations are strongly encouraged. To reserve your seat(s), call the Museum at (703) 746-4356, or click Register at the end of the event listings that are below that you want to attend.

Lecture - The Secret History of Juneteenth by CR Gibbs  -  Noted historian and Port Of Harlem Magazine contributor discusses the history of Juneteenth, celebrated on June 19th to commemorate the announcement of the abolition of slavery in Texas in June 1865, and more generally the emancipation of enslaved African-Americans in the Confederate South.
Free| Register

Thursday, June 23, 6:00 p.m. – 8:00 p.m.
Workshop -Photography with George Tolbert – The former U.S. Senate photographer provides tips and techniques that will make the images you capture victorious. Participants are encouraged to bring their own images on a thumb drive or CD to garner tips on improvement during the session.
Free | Register

Saturday, July 9, 11:00 a.m. – 12:30 p.m.
Film: This Little Light of Mine: The Legacy of Fannie Lou Hamer - Meet iconic civil rights activist Fannie Lou Hamer, an often-overlooked heroine of the Civil Rights Movement. Director Robin Hamilton will discuss her work to shine a light on the life of this bold, unlettered woman in this award-winning documentary film.  A question and answer session with Hamilton follows the film.
Fee $5.00 - pay at the door | Register

All events are free except for the screening of Fannie Lou Hamer, which is $5. Donations are encouraged to support future programming. Free street parking is available. The Alexandria Black History Museum is located at 902 Wythe Street, Alexandria, Virginia 22314, five blocks from the Braddock Road Metro Station on the Yellow and Blue Lines.  For more information, please call 703.746.4356.

The End of Black Harlem
From the
New York Times

I have lived in Harlem for half my life — 30 years. I have seen it in all its complexities: a cultural nexus of Black America, the landing place for Senegalese 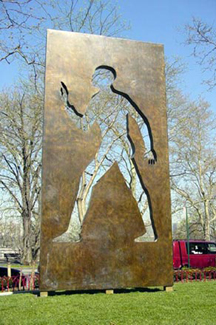 immigrants and Southern transplants, a home for people fleeing oppression and seeking opportunity. Harlem is the birthplace of so much poetry and music and beauty, but in the eyes of many who have never set foot here, it has long been a swamp of pain and suffering.

It is also changing, rapidly. A few years ago I was on Eighth Avenue, also known as Frederick Douglass Boulevard, picketing a fund-raiser for a politician who was pushing for denser mixed-use zoning along 125th Street, the “Main Street” of my sprawling neighborhood. Harlem has seen an influx of tourists, developers and stroller-pushing young families, described in the media as “urban pioneers,” attracted by city tax abatements. New high-end housing and hip restaurants have also played their part. So have various public improvements, like new landscaping and yoga studios. In general all this activity has helped spruce the place up. Not surprisingly, on that day a few passers-by shot us ugly looks, as if to say, “Why can’t you accept a good thing?”

The death of Muhammed Ali was a reminder of how important Muslims are in shaping contemporary America. But the contributions of Black Muslims to the United States begun even before contemporary or colonial times. Such awareness of their contributions make Donald Trump’s comments not only anti-Islamic, but an attack of contemporary Blacks and the ancestors of all enslaved Africans.

One such Muslim ancestor who contributed to America is Ayuba Suleiman Diallo (Job ben Solomon) (1701-1773) (imaged left), whose story we probably only know because of a chance meeting he had with a lawyer. The lawyer was impressed with his knowledge of Arabic and that led to a series of events that landed Diallo in England.

The Port Of Harlem Gambian Education Partnership has just added his panel to its West Africans in Early America exhibit. You can read more about Diallo and view the entire exhibit at the Juffreh Slavery Museum in Juffreh, The Gambia; Timbooktu bookstore in New Bakau, The Gambia; the upcoming A Port Of Harlem Summer at the Alexandria Black History Museum events, and online. The exhibit is part of POHGEP’s efforts to connect Gambians with Americans since 2002. 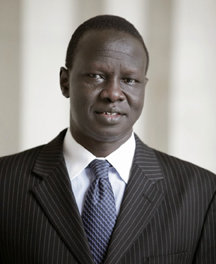 There are about 60 million refugees in the world and the average refugee spends 17years in a refugee camp.  Refugees should not be seen just as victims, but as “models or resilience,” declared John Thon Majok, a former refugee from South Sudan and now a program associate at the Woodrow Wilson Center where he manages grants and provides financial oversight for the Environmental Change and Security Program.

Majok participated in the Society for International Development Conference in Washington.  Though many refugees are non-White, many of the participants and speakers at the Conference have never been refugees and are White.  At the conference, participants discuss a range of subjects from poverty reduction and sustainable development challenges to global health.

Rapper Tip ‘T.I.’ Harris told TIME about the difference between he and Donald Trump:  If I said, “If you beat someone up at one of my concerts who doesn’t agree with me, I’ll pay your legal fees,” I’d be called a common thug.

Look at My African-American Over Here, Donald Trump Says at Rally.  He also suggested that Federal Judge Gonzalo P. Curiel, who is a member of the historically Black Kappa Alpha Psi fraternity and who is also presiding over a lawsuit against Trump University, is biased because he “happens to be, we believe, Mexican.” Judge Curiel was born in East Chicago, - - a small industrial city between Chicago, Illinois and Gary, Indiana; he is of Mexican descent.  Later, on the eve of Ramadan, he said that “It’s Possible” that a Muslim judge would be biased.

After becoming the top two candidates in the Califorinia primary for U.S. Senate, State Attorney General Kamala Harris, who is Black and Indian, will face fellow Democrat Rep. Loretta Sanchez in the fall. In California, all candidates run in the same primary regardless of party, and the top two advance to the general election. 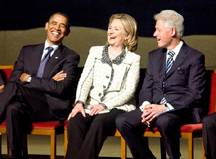 Hillary Clinton on Inclusion:  And it also matters when he makes fun of disabled people, calls women pigs, proposes banning an entire religion from our country, or plays coy with White supremacists. America stands up to countries that treat women like animals, or people of different races, religions or ethnicities as less human.

What happens to the moral example we set – for the world and for our own children – if our President engages in bigotry?

And by the way, Mr. Trump – every time you insult American Muslims or Mexican immigrants, remember that plenty of Muslims and immigrants serve and fight in our armed forces.