On The Dock This Issue:
Why this Millennial Supports Bernie Sanders
By Joshua Jenkins 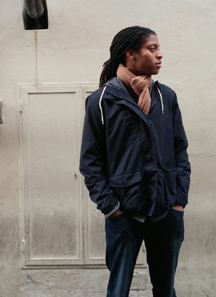 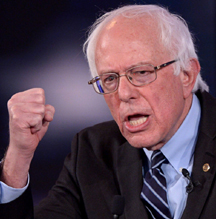 This article is not meant to shoot down others’ political views nor is it to incite any bickering; rather, the purpose of this article is to simply facilitate conversation, and to serve as an explanation for why I hold the political views I do. To begin, I fall on the left end of the political spectrum; farther left than some as I am a supporter of Bernie Sanders, his proposed policies, and his future vision for America.

Because of my ardent support for Bernie and my status as a liberal, I am all too regularly told or asked, “all you want is free things,” “you are just a communist,” “you are too dumb to understand how harmful socialism is,” “have you ever taken an economics class?,” or “you are just another millennial with a sense of entitlement.”

I truly believe Bernie Sanders’ proposed plans will benefit the greater good of the United States. I also believe the implementation of his policies are necessary for America to truly live up to its claim of being a land of equality and equal opportunity, ensure the inalienable rights of life, liberty and the pursuit of happiness mentioned in the Declaration of Independence, and truly make America great; for the first time, for all people.

You have undoubtedly heard Bernie mention the massive and ever-growing gap between the rich and the poor in this country and no matter what side of the political spectrum you fall on you must admit he is right, for numbers, like the Gini coefficient, do not lie.

The United States has a coefficient of approximately 0.45 (Country Comparison :: Distribution Of Family Income - Gini Index). This is comparable to countries like Iran (0.445), Macedonia (0.436), and Nicaragua (0.405). There is a positive correlation between countries with high income inequality and countries with high levels of social issues (crime, mental illness, infant mortality, teenage pregnancies, etc.) And yes, America is near the top of the income inequality graph.

Now, compare these Gini coefficients to the coefficients of countries like Finland (0.268), Norway (0.268), Denmark (0.248), and The Netherlands (0.251). It is no coincidence that the more developed nations have lower Gini coefficients and are located towards that bottom of the income inequality graph, so I view it as incredibly logical to want a president that will do whatever is possible to bridge the gap between the wealthy and the poor.

Do I realize that nothing is truly ‘free’? Yes, I realize nothing is truly ‘free’, but I also realize that there are options worth exploring that could help fund these social programs; options many choose to overlook. For example, I realize the top 1% of America, which owns over 40% of America’s total wealth, can endure slight tax heights. I also realize major corporations should start paying their fair share in taxes, like the pharmaceutical giant Pfizer, which had planned a merger with a corporation in Ireland that would have allowed them to dodge nearly $35 billion in corporate taxes.

You have to realize that some individuals own ladders that have broken rungs and others own ladders that have sunk so far down in the mud that even if they reach the top they will still be behind others. Hard work is not always enough to bridge the gap. The only way for the American dream to be realized is for all to start out on an equal playing field, or one that is not so skewed. My American Dream is true equal opportunity - - and I see that dream becoming a reality through Bernie Sanders.

Jenkins will graduate in December from the University of South Carolina Upstate with a degree in Secondary Education. He will spend a part of his summer in Washington, D.C. as a Capitol Hill intern.

Like George, They Love Sweet Potatoes
By Wayne A. Young 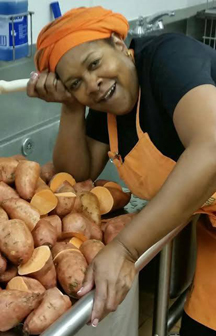 “George Washington Carver did much with the sweet potato just as he did with the peanut. When I visited Tuskegee University in 2005,” said Rose McGhee (left) of Golden Valley, Minnesota, “I had a chance to meet with professors there and gained greater knowledge of how Dr. Carver was teaching people about the nutritional values of the sweet potato.”  “I think about his planting and harvesting the sweet potato and my doing the same in The Gambia,” added Tina Thompson of Springdale, Maryland.

Sweet potatoes are also good for you. “These tuberous roots are among the most nutritious foods in the vegetable kingdom,” says WebMD. “They are packed with calcium, potassium, and vitamins A and C.”

From her suburban Minneapolis home in Golden Valley, McGhee also recalled learning about Mary McLeod Bethune riding her bicycle around town selling sweet potato pies to raise money for what is now Bethune-Cookman University. Tina Thompson, from her suburban Washington, DC home in Springdale, Maryland added, “Sweet potato pie was the first type of pie my mom and grandmother introduced to me.”

McGhee is the woman behind Sweet Potato Comfort Pie, a non-profit that finds troubled souls around the country and delivers sweet potato pies to them. My pies are “a catalyst for caring and building community,” she says.

She started to use sweet potato pies to comfort others while watching the Ferguson uprisings on television. Soon, “I baked about 20 pies and headed down to Ferguson,” recalled the Jackson, Tennessee native about the nine hour drive from Minnesota to Missouri.

The effort has since taken her to other troubled spots including South Carolina, after a terrorist struck Mother Emanuel AME Church. Annually, Golden Valley now celebrates a Martin Luther King, Jr. Day of Service featuring Sweet Potato Comfort Pie where volunteers make a pie for each year since King’s birth in 1929 and gives the pie to someone in a struggle.

Thompson’s charity, Global Mission Society, sells sweet potato pies, other desserts, and dinners for her mission work in Gambia, West Africa. The D.C. native says sweet potato pies are not only delicious and nutritional, but are also economical.  “I can buy a bag of sweet potatoes and make about 10 pies, whereas buying a bottle of syrup, for instance, would allow me to make only two pecan pies,” she says.

To offset the cost of her most recent mission trip to Africa and to raise $4,000 for a chicken farm she hopes to build in Juffreh, the home of Kunte Kinte, the Kinte descendant is baking and selling sweet potato pies and dinners.  She added, “The pies remind me of the family coming together in The South where my American family is from. It was one of our main deserts after we ate dinner and the tradition carried on as we moved to the North.”

According to a new study, people with cancer that starts on the left side of their colon live significantly longer than those with right-side tumors. Richard M. Goldberg, a professor of medicine at Ohio State University's Comprehensive Cancer Center and one of the study's authors, said the research will help medical personnel understand a disparity in outcomes for African-Americans, who are more often diagnosed with right-sided colon cancer and generally have shorter survival times than other racial and ethnic groups.

The colon, also called the large intestine, is a strong, long muscle critical for the last phase of digestion. Scientist cautioned that the results might not apply to patients who do not have advanced cancer.

Researchers have found that diet does play role in one’s chances of getting colon cancer. "We're seeing fewer cases of colorectal cancer in Africa and Asia where the populations eat more rice and vegetables and meat is only used as a seasoning, rather than a Ruth's Chris-sized steak" or McDonald's hamburgers, that are more often the main fare in America, Goldberg said.

The U.S. Food and Drug Administration (FDA) and the White House announced final changes to nutrition labels, “I am thrilled that the FDA has finalized a new and improved Nutrition Facts label that will be on food products nationwide,” said First Lady Michelle Obama in a statement. “Maintaining good health just got a bit easier,” added Port Of Harlem contributor Theo Hodge, Jr. MD. (Click the label to enlarge)

Consumers will note that the calorie count is now in larger type. Certain nutrients that officials say are of public health importance will also be required, like vitamin D and potassium.

The FDA released the then proposed changes in July 2015 and after reviewing public comments and research, they made changes to the labels. The White House reports that the current labels and servings sizes were enacted in 1993, when Americans ate differently.

Now, says Dr. Hodge, when he informs “Miss Washington” that she must diet and exercise to effect a change in her weight (obesity), high blood pressure (hypertension), high cholesterol (hyperlipidemia), and sugar (diabetes), “the new food label changes will assist her with the diet portion of his mandate.”

TIME: What Science Says About the Bathroom Debate

Even outside the bathroom, sex divisions in the U.S. have blurred and blurred again over just the past half century so that what was once jarring—men with long hair, women in pants, earrings and piercings and tattoos on both sexes—has become entirely unremarkable.

Obama Quote of the moment, maybe the decade:  "In politics and in life, ignorance is not a virtue. It's not cool to not know what you're talking about" – Barack Hussein Obama

More Obama Firsts:  America’s first African- American president rolled in two more first in the past two weeks by appointing and seeing through the confirmation of: Carla D. Hayden as the first Black to head the Library of Congress and Eric Fanning as the first openly gay army secretary

NAACP – Voting Worked:  If you've wondered whether voting really matters, the recent elections in Cleveland and Chicago are the proof you need. The prosecutors who tragically botched the Tamir Rice and Laquan McDonald cases recently lost re-election and their jobs. The message we sent was loud and clear: When elected officials act as though our lives don't matter, and intentionally delay serving justice, NAACP members and allies demonstrate in the streets, and defeat them at the ballot box.

Increasing Importance of Black Voters:  Jonathan Capehart details in a Washington Post opinion piece on the increasing importance of the African-American vote. He writes, “Steve Phillips writes that President Lyndon Johnson’s 1964 election was the last time a Democrat won a majority of the White vote (58 percent). Since then, the average has been 39.91 percent. President Obama was reelected in 2012 with 39 percent of the White vote. And, according to Phillips, he did it with “5 million fewer White votes than he received in his initial election in 2008.” 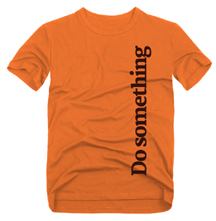 POV Film Screening:  From Selma to Stonewall: Are We There Yet?
Union Theological Seminary
3041 Broadway at 121st Street
Thu, Jun 2, 6:30p-8p, free

America
Join thousands of organizers across the nation who are wearing orange
to raise awareness and inspire action to end gun violence
Thu, Jun 2, free Coming
A Port Of Harlem Summer at the
Alexandria Black History Museum
-