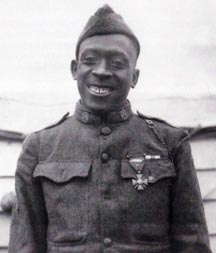 On February 15, 1898, the Battleship Maine exploded in the harbor of Havana, Cuba. Twenty-two African Americans were among the more than 250 American sailors killed. Stateside, bellicose newspaper headlines, surging expansionist sentiment, and Spanish atrocities in Cuba, helped to create an irresistible pro-war atmosphere.

In mid-April, President McKinley sent a war message to Congress which was quickly approved. The Regular Army was expanded to more than 62,000 men. Funding was provided for a volunteer Army of 125,000 men. White and some Black militia units were also called to service.

While they were getting ready, the Buffalo Soldiers (9th and 10th Cavalry and 24th and 25th Infantry Regiments) were among those regulars who were ordered to pack their weapons and equipment and set sail for Cuba. During the Spanish American War, six African Americans won the Medal of Honor, five of them members of the 10th Cavalry - - four of them for their bravery during the Battle of Tayabacoa - - and one sailor aboard the U.S.S. Iowa.

The July 14, 1898 edition of the New York Sun newspaper described Tayabacoa as "a hamlet at the mouth of a little river of the same name which empties into the Caribbean Sea about five miles west of Tunas, on the south coast of Santa Clara province. Tunas is a small port connected by rail with Saneti Spiritus in the centre of the island."  A strongly defended Spanish fort stood about four miles west of Tunas. The guns of the fort covered the beach where the Americans had chosen to land supplies, equipment, mules, and reinforcements for the Cuban rebels.

On June 29, 1898, even with supporting fire from offshore American warship, the initial landing did not go well. Spanish cannon fire swept the beach. What started out as a resupply mission turned into a rescue mission. The next day, after four failed attempts, a group of men from the 10th Cavalry were finally able to pull the wounded men off the shattered beach.

For the desperate courage they showed under fire, four men of the 10th Cavalry received Congressional Medals of Honor. One of the men, Private Dennis Bell, was a native of Washington, D.C. Privates William H. Tompkins and George Wanton had been born in Patterson, N.J., while Private Fitz Lee was from Dinwiddie County, VA. They were all cited for voluntarily going "ashore in the face of the enemy and aiding in the rescue of their comrades; this after several previous attempts at rescue had been frustrated."

The announcement that four Black men had received Medals of Honor at the same time made national news and once again offered further proof of African American bravery. The July 1, 1899 St. Paul, MN Appeal, an African American newspaper, raised another issue: "Medals are all right, but we would like to see some of the Afro-American heroes rewarded with officers' commissions." That did not happen. There were only six Black officers in the Regular Army in the 86 years from the Civil War to World War II.

Other medal winners included: Edward L. Baker, Jr. - A Sergeant Major born in Laramie County, WY, also in the 10th Cavalry, earned his medal for leaving "cover and, under fire, rescued a wounded comrade from drowning" in a stream at Santiago, Cuba on July 1, 1898. Baker received his medal in 1902. Robert Penn -   A Fireman First Class in the U.S. Navy, Penn was the only African American sailor to win a Medal of Honor during the Spanish American War. On July 20, 1898, while on board the U.S.S. Iowa in the harbor of Santiago, Cuba, the City Point, VA native, after an explosion in boiler room number #2, "at the risk of serious scalding at the time of the blowing out of the manhole gasket on board the vessel, hauled the fire while standing on a board thrown across a coal bucket one foot above boiling water which was still blowing from the boiler." He was awarded the Medal Honor six months later.

Over 120 Medals of Honor were given for valor in World War I, none to African Americans. This oversight was not corrected until 1991 when President George H.W. Bush posthumously presented the Medal of Honor to the family of Corporal Freddie Stowers, 73 years after his death on a French battlefield. Even Stowers' unit, the 93rd Division, was attached to the French Army because the American Army was initially reluctant to employ Black soldiers in combat. Freddie Stowers - Born in Sandy Springs, SC, Corporal Freddie Stowers was part of the first military draft of the war. On September 28, 1918, Stowers, while serving as a squad leader of Co. C, 371st Infantry Regiment, 93rd Infantry Division, led his men in an assault on Hill 188.

Soon after the attack began, the German soldiers appeared to begin to surrender, but it was a trick. They resumed firing on the Black Doughboys. Stowers and his men made it to the German trench line and silenced one of their machine guns. Stowers was fatally wounded as he led his men forward, but he continued to encourage them to take their objective, which they did, inspired in large measure by his leadership and fearlessness.

Stowers' commanding officer recommended him for the Medal of Honor after his death, but "the paperwork was misplaced." It must be noted, however, that World War I took place during a period of intense and often violent racism against African Americans. Even Stowers' unit, the 93rd Division, was attached to the French Army because the American Army was initially reluctant to employ Black soldiers in combat. President Bush put the medal in hands of Stowers' sisters, Georgiana Palmer and Mary Bowens.

Henry Johnson - (pictured) While the bravery of Freddie Stowers went unknown for decades, only his death listed as "killed in action" in a few newspapers, Henry Johnson was known for his courage almost from the beginning.

The New York Sun newspaper called him a "Prodigy of Valor." Former President Theodore Roosevelt called Johnson "one of the five bravest American soldiers in the war." A member of Co. C, 369th Infantry Regiment, 93rd Infantry Division, Johnson, who was born in Winston-Salem, NC, and his friend Needham Roberts were manning a forward outpost on May 15, 1918. They were attacked by a raiding party of at least 12 Germans.

In bitter hand-to-hand fighting, Johnson and Roberts sustained several serious wounds but kept resisting with rifles, knives, and fists. When the Germans tried to drag Roberts away, Johnson saved him. The Germans were forced to withdraw. Some journalists called it the "Battle of Henry Johnson."

His regiment, the 369th, was known as "The Harlem Hellfighters" and its gallant actions in the war helped change the American public's attitude toward Black American soldiers. Although the French gave him a medal, Johnson, who had come to New York City and worked as a porter, received nothing from the U.S. Army. He was unable to do his old job because of the 21 wounds he had sustained in the battle.

He died destitute and alone in 1929 and was buried in Arlington National Cemetery. Sixty-seven years later, he was awarded a Purple Heart. Six years after that, he also posthumously received a Distinguished Service Cross.  In June, 2015, President Obama awarded Johnson a Medal of Honor. "While the nation cannot change what happened to Johnson, and other soldiers like him, who were judged by the color of their skin, we can do our best to make it right," the President said.

Publisher’s Note:  Part 4 of this 5 part series will appear in an upcoming issue of Port Of Harlem.

Africans at the Grammys
By Oral Ofori

“Branches of The Same Tree,” the latest album of the celebrated Ghanaian Afro roots artist Rocky Dawuni has been nominated for a Grammy award in the Best Reggae Album category for the 2016 Grammy awards.

A few other globally recognized artists with recent African lineage that were also nominated for the 2016 Grammys include The Weeknd of which Canadian born Ethiopian musician Abel Tesfaye is a member. They were nominated eight times, one under the R&B category for their song “Earned.”  It was sung by Tesfaye for the “Fifty Shades of Gray” movie soundtrack.

In the Rap Song of the Year category, the single “All Day” from the seventh studio album by Kanye West titled SWISH also earned a Grammy nomination. Kanye credited over 20 artists for writing songs on this album, one of which is Victor Kwesi Mensah, popularly known as Vic Mensah, a Chicago based hip hop artist with a Ghanaian father.

Two-time Grammy winning artist Angelique Kidjo from the West African nation of Benin first won a Grammy in 2008 for her eighth studio album “Djin Djin,” then again in 2014 for her album “Eve,” both in the World Music category. She gets another taste this year with a nomination in the same category.

Zomba Prison group, the gentle chorus of maximum security prisoners, who sing over simple guitar chords, has earned the small landlocked country of Malawi, located in southeastern Africa, its first Grammy nomination. Winners will be announced at the Staples Center in Los Angeles, Monday, February 15, 2016. 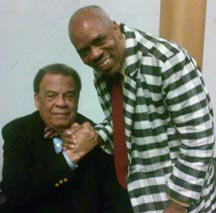 Former UN Ambassador Andrew Young told the story of how a young “hoodlum” changed his life at the National Youth Summit in Washington. The story started when the two were kicked out of third grade for playing with an ice pick. Years later they meet again and compared lives.

The other guy had been in and out of reform school. Young was considering dropping out of school, but the “hoodlum” deplored him to finish school and make something of his life.

The St. Louis-based The Ethics Project sponsored the event where Young spoke and in keeping with Young’s experience, the Project included students regardless of their academic standing says Project founder Christi Griffin. We want the students to know that “they are not the problem, but they have to be the solution.”

More than 450 students benefitted from the three day National Youth Summit that included an intergenerational reception and workshops at the Kennedy Center and Howard University. The hour long workshops raged from educational to social justice and economic issues and led by diverse leaders from former Bennett College president Julianne Malveaux to Terrence Roberts, Ph.D., one of The Little Rock Nine. 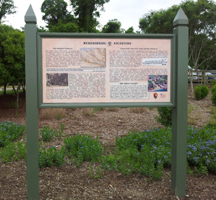 With two wayside markers on the city’s riverfront documenting the arrival of Africans in Fredericksburg, the state of Virginia now has markers at all of the major locations where enslaved Africans arrived in the state.  The placements were part of the Middle Passage Ceremonies and Port Markers Project (MPCPMP) effort to have markers at all ports of entry for Africans during the 350 years of the transatlantic human trade.

However, “We do not know when the formal installation will occur. There are landscaping issues that have to be addressed, but the city did honor its commitment to place markers related to Middle Passage history,” concurred Ann Chinn, founder and Executive Director of the project.

She started the non-profit tax exempt organization in 2011 to honor the two million captive Africans who perished during the transatlantic crossing known as the Middle Passage and the ten million who survived to build the Americas. Chinn first announced the program in the November 2008 - January 2009 issue of Port of Harlem magazine..

The U.N. Working Group of Experts on People of African Descent released its preliminary recommendations after more than a week of meetings with Black Americans and others from across the country, including Baltimore, Chicago, New York, Washington, D.C., and Jackson, MS.

The Latest on HR 40 – U.S. Commission to Study Reparation Proposals for African-Americans Act 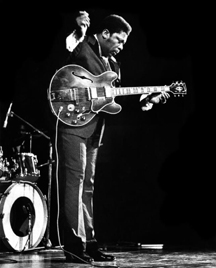