On The Dock This Issue:
Money

Social Security Expansion on the Table
By Wayne A. Young 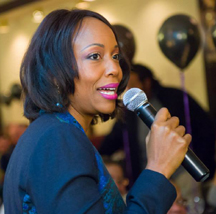 Social Security is critical to many Blacks. Forty-six percent of African Americans rely on it for more than 90 percent of their retirement income. Social Security also continues to be the largest piece of household income for all retirees, making up an average of 52 percent of household income for those who are 65 and older. Steve Hill, author of “Expand Social Security Now! How to Ensure Americans Get the Retirement They Deserve” asserted during a recent panel discussion, “it’s the greatest anti-poverty program” in the history of the United States, especially for women and minorities.

To make up for the unstable stool, added Altman, “There is no question that we can afford to expand Social Security.”  She explained that by 2090, Social Security will only be 6.1 percent of America’s gross national product (GNP).  (GNP is the value of all the products and services produced in one year in a country.) In great contrast, in 2016, European economic powerhouse Germany’s equivalent to Social Security already takes up 11 percent of its GNP.

Center for Global Policy Solutions proposes to pay for Social Security’s expansion by lifting the cap on the wages subject to Federal Insurance Contributions Act (FICA) taxes. “This is justified because the current cap, $118,500, has not kept up with the dramatic growth in wages for the nation’s highest income workers,” says the group headed by Maya Rockeymoore (pictured).

The panel also discussed how Congress has exempted unearned income from FICA contributions. Many of the wealthiest Americans earn money “not from salaries, but from unearned income,” echoed many of the panelists.

The Center for Global Policy Solutions details its proposals to expand Social Security in “Plan for a New Future: The Impact of Social Security Reform on People of Color.”  Hill, who proposes doubling monthly Social Security benefits, added that even Democrats need to be pushed on these issues. “Clinton has waffled on this issue badly.” Obama does not have a strong record on this issue, either, he surmised. “To his credit (Obama) has come around,” he continued.
Arno favors lifting the 118,500 taxable income cap. Because of the cap, he said, six percent of the labor force has been exempted from making contributions on about one trillion dollars of wealth.

Social Security, Not For Seniors Only

Congresswoman Jan Schakowsky (D-IL) set the tone for a subsequent paneled session where the Center for Global Policy Solutions released its newest report “Overlooked but Not Forgotten: Social Security Lifts Millions More Kids out of Poverty.”  “We have to paint a true picture of what Social Security is,” she stressed.

Each of the panelists found unique ways to describe Social Security’s multi-generational impact. “It allows families to maintain their independence,” added Altman, who served on both panels.  Generations United’s Executive Director Donna Butts spoke of people including House Speaker Paul Ryan (R-WI) who benefited from Social Security as children. She added, “It’s a family support program.”

Mirroring the findings in the report, Peter Arno of the Political Economy Research Institute outlined that three million children benefit from Social Security directly and another 3.2 million benefit indirectly. He cited an increase in the number who benefit from Social Security indirectly to the rise of multi-generational families - - which has risen by 70 percent since 1990 he says.

Most agreed that Congress should restore the student benefits program added in 1965 and dropped in 1981. The program allows Social Security survivor recipients to receive aid until they are 22, if they remain in college.

Like other panelists, Arno favors lifting the 118,500 taxable income cap.  Because of the cap, he said, six percent of the labor force has been exempted from making contributions on about one trillion dollars of wealth.

Coming this Fall:  You and Expanding Social Security at A Port Of Harlem Fall at the Alexandria Black History Museum.

In a never-before-seen video from  In Their Own Words: The American Masters Digital Archive, singer, dancer, actress and civil rights activist Lena Horne shares her disappointment in the lack of progress made toward racial equality throughout her lifetime.

Hand to God
By Wayne A. Young 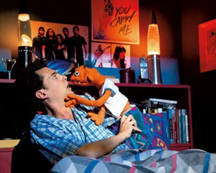 Come early. You can buy a drink, alcoholic or otherwise, and a snack. Before the play starts, you will sit on the set, created to resemble a church basement, and make a sock puppet that you can take home.

Before Studio Theater’s “Hand to God” opened and I attempted to make a sock puppet, I thought the play was awfully edgy - - serving alcoholic beverages in the church basement. I thought how some of my readers would find the satire set in a Christian puppet ministry irreverent. However, the first half of the storytelling was so intriguing that it seemed to end quickly.

During intermission, I read the press release’s headline:  Blasphemous Broadway Hit at Studio Theatre This Summer. Wow!  “Hand to God” was living up to its billing.

I missed the talk during its run on Broadway where the Tony Awards praised playwright Robert Askins with five nominations. “Rob’s play is truly outrageous - - there are scenes that you really just won’t believe,” remarked Director David Muse. I agree.

“You used church to try to f*** me,” a line that Susan Rome (as Margery, the mother) delivered was one of the play's most memorable tell-tale lines. The acting was equally notable. Without the magic of film or television, Liam Forde as Jason, Margery’s son, and Tyrone, his puppet, convincingly pulled off his possibility of being possessed by the devil.

However, this play is not for every one.  I cannot see Sister Jones leaving 11am Sunday service with her blue hate and pound cake and not wonder if I had lost my religion for liking this play - - even if similar events were unfolding in church.

Nevertheless, the gratuitous sex talk and action in a religious setting was not like a pornographic movie filmed in church - - it was creative and thought-provoking, the actors had to perform without the magic of film and yes, it was out-of-the box - - what one would expect from live theater. I am glad I did not miss it.

This Little Light of Mine 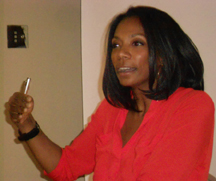 “The Civil Rights Movement is portrayed as being very male dominated.  Why is that?” questioned Erica Palmer of Alexandria, one of the youngest members in the audience that watched the screening of “This Little Light of Mine: The Legacy of Fannie Lou Hamer." The film’s director Robin Hamilton responded, “It was male dominated. Women were really relegated to being number two.” The screening was part of A Port Of Harlem Summer at Alexandria Black History Museum.

Hamilton continued her talk by explaining that Hamer stands out among many leaders because she did not fit the model many, Black and White, wanted as a spokesperson. There was classism, colorism, appearance and many other isms at work said Hamilton. “It’s a shame,” concluded Hamilton, who also praised Hamer for opening the doors of opportunity for her and others.

The 27-minunte film attracted more than 40 people, some who relived moments of their own contributions to the Civil Rights Movement. Patricia Ferguson-Smith, an attendee from Silver Spring, MD, says she no longer can march, but she still writes her opinions and expectations to the White House.  Click here to send the White House your message.

Last Event for the Season

Saturday, July 23, 11 a.m. – 1:00 p.m
Workshop - Photography with George Tolbert – The former U.S. Senate photographer provides tips and techniques that will make the images you capture victorious.  Participants are encouraged to bring their own images on a thumb drive or CD to garner tips on improvement during the session.  Free | New Date and Time | Register 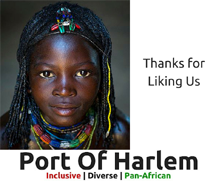 It was not long ago, that we were at 600 Likes on our Facebook page, Port Of Harlem. We are now toping 800! We are seeking more Page Likes.

- “I will call for White people, like myself, to put ourselves in the shoes of those African-American families, who fear every time their children go somewhere, who have to have the talk about ... how to really protect themselves, when they are the ones who should be expecting protection from encounters with the police,” Hillary Clinton said.

“I’m going to be talking to White people. I think we are the ones who have to start listening to the legitimate cries that are coming from our African-American fellow citizens, and we have so much more to be done, and we have got to get about the business of doing it,” said Clinton. “We can’t be engaging in hateful rhetoric or incitement of violence. We need to bring people together.”

- “On that sad day when we lost Justice Scalia, I made another pledge that Obama would not fill this seat. That honor will go to Donald Trump next year.”

- As governor of Indiana, Mike Pence allowed the use of needle-exchanges to combat an HIV outburst in a rural-White section of the state. State Rep. Charlie Brown (D-Gary) and others had to lobby for the urban areas of the state with large Black populations, Gary and Indianapolis, to get equal treatment.

- Indiana has a long history of vice presidential nominees. Dan Quayle was the last vice president to hail from Indiana, serving under President George H.W. Bush from 1989 to 1993.

- CBS reported that there are only 18 Black delegates at the GOP convention (out of about 2,500), the same number as in 1964 - - when Fannie Lou Hamer and the Mississippi Freedom Democratic Party tried to get seated.

The latest Senate polls have Kamila Harrris (D) beating Loretta Sanchez (D) 39 to 24 in California and Michael Bennett (D) beating Darryl Glennn (R) 53 to 38 in Colorado. Harris and Glen are of African descent. 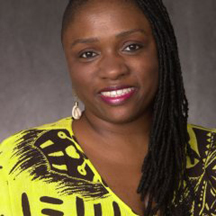 The Good News About Racism
presented by Eraka Rouzorondu
Baltimore