Using Your Home as a Finan cial Tool
By Donna M. Smith 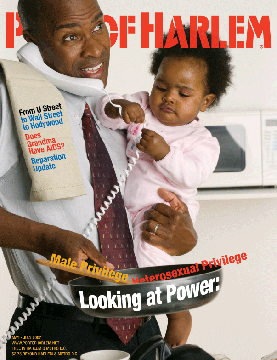 On The Dock
COVER STORY
20 Looking at Power:  Male Privilege / Heterosexual Privilege
Why does it take more evidence to convict a man of the theft of the sanctity of a woman's body than to convict a man of a theft of property? Why do men, particularly young men, have to prove their manhood by manifesting some type of physical or violent activity?  Our experts examine these questions and provide you with very provocative, enlightening, and even liberating answers.

FOCUS: Looking at Power
23 Believing in Male Supremacy Will Not Save Us

24 When Having Money is Not Enough

DEPARTMENTS
2 LETTERS TO THE EDITOR

THE PUBLISHER’S POINT
4 The Mosaic

PRAISING THE PAST
5 Bayard Rustin: Defying the Odds

THE OTHER SIDE
6 Jail House Art

In Fashion
7 Wearers and Dressers

TRAVEL STORY
12 Hampton – All that Jazz and More

HEALTH
14 Does Grandma Have AIDS?

16 Who in Your Family is at Risk for Vision  Problems?

COMING UP
27 Gary, IN Railcats' Opener, Caribbean Carnival and more

;
;
Looking at Power: Male Privilege/Heterosexual Privilege
By Wayne A. Young
;
You may have heard a comic tell the joke about a woman who while walking down a dimly lit street is raped by a man. After the victim hesitantly reports the rape to the police, the police captures a suspect. In court, the suspect's attorney defends his client by questioning the integrity of the victim by asking if she provoked the attack. He asked, "Why were you walking down a dark street in a bright red dress, you must have been looking for something?"

In the adjacent room, the court tries another man for robbing a man of his gold diamond encrusted watch on the same dimly lit street that the rapist attacked his victim. Yet, no one suggests that the male victim somehow provoked the robber to take away his possessions.

In life, such is the case with the alleged Duke University rape victim. The media has reported that not only was she an exotic dancer and the mother of two, but pregnant with a third child. A second round of DNA tests revealed that semen in her body could have been from several other men who were not the alleged rapists. We know very little about the alleged criminals except that they are non-Black males from well-off families.

"Why does it take more evidence to convict a man of the theft of the sanctity of a woman's body than to convict a man of a theft of property?" rhetorically asked Jacqueline Elaine Featherston, a San Francisco-based equity and justice consultant and educator. Dr. Eddie Moore, Director of Diversity at Seattle's Bush School and founder of an annual White Privilege Conference, responded, "This situation reminds me of how good it is to be a heterosexual man in America. Honestly, this is another sad reminder of just how much systems and institutions across this great nation have, and continue to be, dominated and controlled by men."

In the new ABC hit-drama "Ugly Betty", Justin Suarez is the son of Hilda and the nephew of Betty. In the episode, "Lose the Boss," Justin's estranged father is dismayed that his artistically-gifted, flamboyant son has been shopping at a fabric store so he attempts to stifle his son's artistic interest by saying, "Yo, what do you say if we go out and get some fresh air . . .toss some football ... come out and be a normal kid for an hour."

"Why do men, particularly young men, have to prove their manhood by manifesting some type of physical or violent activity?" rhetorically asked Moore. Featherston responded, "As heterosexuals it is possible for us to take our unearned privileges for granted, as though it accrues to us because we are good people or deserve it. The ability to speak openly of our partners in the work place, the societal perks that accrue to married couples, the assumption that we are better suited to child-rearing than our homosexual counterparts, that our behavior is normal are all unearned, and often undeserved privilege."

"The goal of dismantling the systems of granting privileges to one group and oppressing another is to create a world society where all people have full access to the opportunities and benefits of society; therefore, enabling all people to fully experience life and realize their potential without unnecessary barriers," explained Featherston.  She added that dismantling the systems of oppression are not the same as building a color-blind world. She emphasized, "Differences are not of themselves the problem, nor is valuing some differences more than others; it is oppressing people because of those differences."

However, heterosexuals are not the only group who practice heterosexism. Beliefs held by gays, lesbians, bisexuals, and transgender people also often cause them to practice heterosexism. Citing an example, Featherston explained, "At the beginning of the AIDS epidemic (and even now) some gays exhibited internalized oppression; oppressing themselves and deferring privileges to heterosexuals by believing that getting the disease is what they deserved for being gay. They held these beliefs despite the fact that AIDS afflicts people across lines of race, age, gender, and sexual orientation."  Quoting South African freedom fighter Steve Biko, Moore echoed, "The greatest weapon in the hand of the oppressor is the mind of the oppressed."

Similarly, the practice of accepting male privileges or the belief and practice of male supremacy is not limited to males. Moore cited an example of a discussion with some young women who were viewing a historical display of U.S. Presidents and believed that the men made it to the top simply because of hard work and leadership qualities. "These women accepted their oppressors' beliefs and practices and did not think of the men's achievement as the result of a systematic organizational design to keep men on top," he explained. "Differences are not of themselves the problem, nor is valuing some differences more than others; it is oppressing people because of those differences."

- Jacqueline Elaine Featherston Both Featherston and Moore also agree that even the oppressed can oppress others. "We are often unaware of our own oppressive behavior because we are usually taught about what privileges we do not have versus the privileges we have," she said. For example, Featherston continued, "It pained me to think that actor Isiah Washington, often oppressed because of his race, used his heterosexual privilege to verbally discount and shame a gay co-worker who is White. Generally race trumps sexual/affectional orientation, but not always. It is also interesting to note that the media chose a Black man to so strenuously make the point that overt heterosexist behavior is inappropriate." [Subsequently basketball player Tim Hardaway was chastised for his homophobic remarks].

Moore added, we sometimes are even aware of our privileges and use them to our advantage. "I sometimes use my maleness, and become very domineering and intimidating to female service workers when I am complaining or seeking more from the service industry," he sadly admits.

To learn how to dismantle the systems of oppression, Moore states that at the White Privilege Conference  participants learn not only about White supremacy, but the other systems of oppression including whom society labels superior and inferior. Featherston likes his tactic, "the opportunity to challenge the process of oppression is lost unless a society begins to recognize the connection between the groups of people that it labels superior and those it labels inferior." (See Common Types of American Oppression).

"Even seemingly simple proverbs that have been traditionally useful for passing on cultural values can be oppressive," added Dr. Carolyn Cooper, Professor of Literatures in English at the University of the West Indies at Mona, Jamaica. "A good example is the Jamaican proverb, 'two pot covers can't shut.'"  Metaphorically extended, the proverb suggests that the pot (female) and the cover (male) are a natural fit," she explained.

"Our goal," said Moore, "is to build an America where we truly have equity and equality for all." Added Featherston, "Unlike Hitler, we want to create a world social order in which all persons have full access to the opportunities, goods, resources, benefits, and rewards of society so that all people can fully experience life as if oppressive barriers were not in their way."

This is the Same Cover Story, but in its Original Layout