Sam Ford is a general assignment reporter for ABC7 and WJLA 24/7 - Washington, DC. The Kansas native is a founding member of the National Association of Black Journalists. 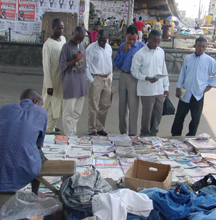 The “Bend Down Bookstore.” It’s an outdoor newsstand where people come to read the news by bending down and reading the headlines on the newspapers and magazines.

Some time had passed between the time I first heard about DNA fingerprinting for tracing ancestral roots and when I completed a story on the issue for my employer, WJLA-TV (ABC) in Washington, D.C. In that report, Howard University’s human genome lab traced my male ancestry back to the Yoruba section of Nigeria. This is the second of two parts that recount my recent trip to the land of my ancestors. WJLA also aired a report on this trip. Pege, my camerawoman, and I were extremely nervous as we approached customs at Lagos’ Mutala Muhammed Airport. We’d read a book by a British journalist who reported how customs officials had accused him of bringing an old laptop into the country to sell. They threatened to confiscate it unless he paid a $300 import tax. He negotiated them down to $100.

We were carrying very expensive television equipment. However, to our pleasant surprise, all the customs people said to us, was, “Welcome to Nigeria.”

After checking into our hotel, we eventually found Lloyd Weaver, whom a friend asked us to contact. Weaver is the great-great grandson of Frederick Douglas. “I always dreamed of living part of my life in Africa,” said the Washington native.

Weaver’s parents raised him in Harlem. He came to Nigeria with Randy Daniels to teach Nigerians how to do television as it’s done in the United States. (Daniels is now New York’s Secretary of State) “A lot of African Americans wear Africa in their hearts and on their head, but they can’t deal with the poverty and inefficiency. Some guys [come here and] go into shell shock!” says Weaver, who owns a television production company.

Though Weaver doesn’t think that Lagos’ crime rate is as high as New York City’s, he recounted being robbed at gunpoint in his office, witnessing his security guard’s murder at his business during a robbery, and being shot at by robbers in his house.

Lagos, Nigeria’s financial capital, is a cosmopolitan city filled with many ethnic groups. “As far as I’m concerned, I’m a part of the mix. We are all African people,” Weaver says.

He later guided us through his neighbourhood, starting at the Ikeja bus stop. Instead of buses, we found minivans, the backbone of Lagos’s transportation network.

A relatively new part of Lagos’ transportation network is the taxi bike. These mini bikes maneuver much better than vans through the “go slows” or traffic jams. Peddlers take advantage of the “go slow” by selling wares to motorists who have nothing better to do than look and buy.

He later showed us the spot he called the “Bend Down Bookstore.” It’s an outdoor newsstand where people come to read the news by bending down and reading the headlines on the newspapers and magazines. “Often not buying,” commented Weaver.

We also went to the Lagos beach where I saw no one half naked as at American beaches. People, it seemed, were there more to wade than anything else.

The following day, we traveled 120 km (75 miles) to Ibadan, Nigeria’s largest city. As we crossed this old, very African city, the views were arresting. Mile-after-mile of brown, low level tin rooftops filled our view. The whole city has a brown tinge to it. Our principal guide in Ibadan was Kumi, who had worked as a cameraperson with Lloyd and other African Americans in Nigeria. He is also a 9th generation babalao, a spirit priest. These mini bikes maneuver much better than vans through the “go slows” or traffic jams. Peddlers take advantage of the “go slow” by selling wares to motorists who have nothing better to do than look and buy. We went first to Kumi’s shrine that was behind his home. He brought out some gin, which I declined, since I don’t drink. During the “divining” ceremony, he gave me two cowrie shells, one representing good and the other bad. Since the shell representing good was in the right hand, the answer was “yes.” The quality of my life depends upon how well I get along with my Orisha, or guardian spirit, he said.

Kumi continued the ceremony with 16 cowrie shells and determined that my Orisha is Obatala and to please him, I should wear his favourite color, white, as much as possible. It was Friday and quite a spiritual day. On our way to the market we ran into worshippers headed to a mosque for Friday prayers. The mosque quickly filled with people and though we were nearly a block away, we beam part of the service as people stopped in the streets and joined the proceedings being boomed over loudspeakers.

We also went to the University of Ibadan to interview Professor Gabriel Oguntomisin. During our talk, we explored scenarios under which slave catchers would have captured my ancestor and had him shipped to America.

Oguntomisin said many Yorubas became enslaved between the late 1700s and mid 1800s during the civil war between the Alaafin, the King, and his top general, Afonja. He said both sides sold captured humans to raise funds need to buy arms and ammunition.

We had run out of things to do in Ibadan, so we took an hour drive to life. As usual, machine gunwielding police stopped us at checkpoints.